Winter Fly Fishing brings out our stalwarts. Those loyal Fly Fishers who embrace a day’s weather conditions and pit their wits to tempt a Rainbow out of the pristine, clear and chilly water. The majority are prepared, wrapped up with thermal base layer, warm waterproofs, a vast array of hand warmers. I particularly favour the old charcoal boxes, and of course, the all-important fly boxes.

They march around the sometimes sodden and frequently frozen lakeside. Every breath is inhaled deeply, filling their lungs and nurturing their quest for a Rainbow.

When the water is in winter’s pristine state we can stock the lakes with a few larger fish. This year we went for Whopper Week, we popped thirty large Rainbows and a couple of Browns into Spring Lake. Fly Fishers were hindered with an early winter layer of ice and snow. However twenty were caught fairly quickly leaving us with a few very much sought after specimens. We are still awaiting a new Lenches Lakes Rainbow record to beat the existing 16lb 2oz. We have established a new Brown record of 10lb 4oz. 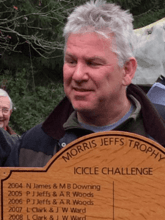 In the depths of the festive period we host the Annual Icicle Challenge, a social competition. Nineteen of our winter stalwarts gathered to compete for the glory and honour of the 2017 title and trophy. Great camaraderie accompanied the competition both lakeside and within the Clubhouse. Six fish were to be caught between each pair of fly fishers, heaviest ‘bag’ winning. The Clubhouse offered festive tots of Whiskey and Brandy, Mince Pies, Bacon sandwiches, Coffee/Tea, hot soup and bread rolls. A wonderful air of festive fun surrounded all, even the one who chose to have his ’duck day’ that day.

Many fish were caught, plus a few slightly heavier at 3 to 4 lb Rainbows, a couple of 2lb Blue and a beautiful 7lb 6oz Rainbow.

Kevin Collins was the deserved winner, he fished with determined perseverance right up to the final whistle. He managed to tempt five Rainbows out of the water with that 7lb 6oz amongst them. Congratulation to Kevin. Thank you to all who participated making it such an enjoyable day. 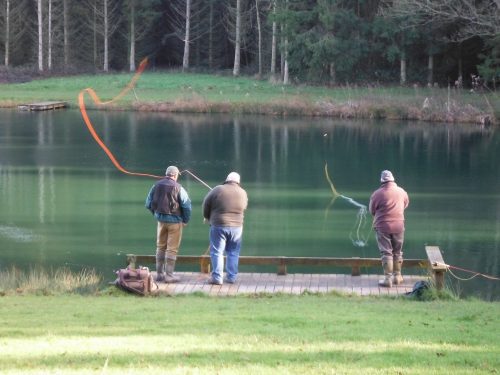 Summer Open Water Swim Session on Thursday 6.30 a.m. start Sessions can be booked via our online booking system Swim passes for 5 or 10 Sessions are also available from our Bookings page
View Calendar
Add